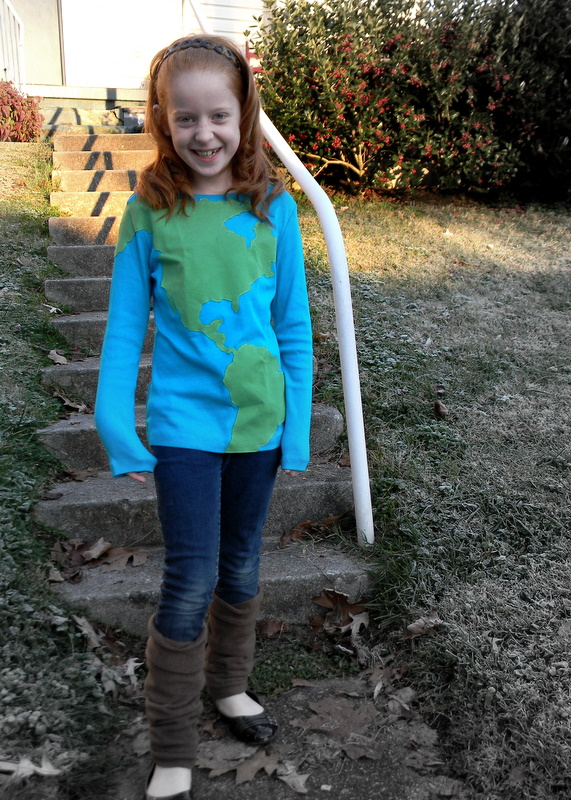 As I was rummaging through my pictures a little while ago, I found this one of my thespian daughter
that I had completely forgotten about. I meant to blog about it but was wrapped up in bows! (ha, pun-y!)

Imagine my pride and joy when she came home early in September exclaiming that she landed the role of
Mother Earth in her school play! Okay, so I was the dorkiest drama nerd of all time when I was in
school, so I really was excited. And then her teacher told me that we'd need to come up with a costume for her. Yes!! I think Mrs. G was reluctant to ask the parents to make costumes but I felt enthusiastic because I'm also a nerd in that department too!

We really could have gone the paper mache route but I, for whatever reason, just didn't want to do that. Then I thought, I'd make her a big tutu with green and blue tulle and have her wear a shirt with a picture of the Earth on it.....but this girl's not a frilly one. Instead, I grabbed a long sleeved shirt from Target, used this  outline of North and South America, then slapped some of this on to make the continents stick to the shirt.

The last step was to top stitch, and let me tell you, that was no picnic! It was a giant pain....like huge!

You know the thing I liked best about this costume? It's something that she still wears!! That's my favorite kind of costume by far.