Old Fashioned Fudge and a story 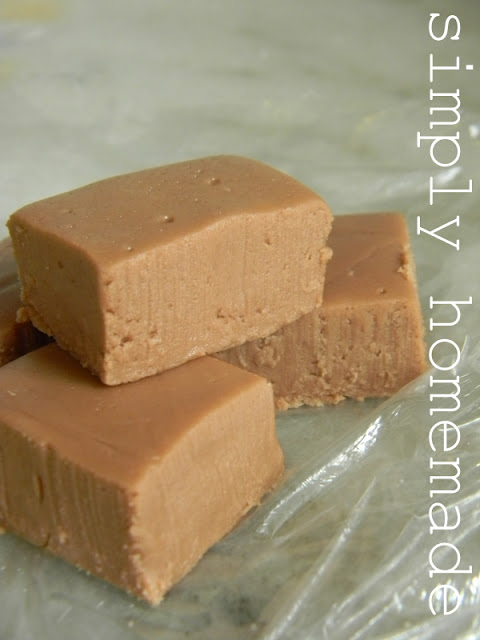 When I was a kid, my family had this tradition of reading a Christmas-y story every night in December. You know the "feel good" kind that always makes you cry? Ya, that's what we did. Lots of crying all through December but it was great. I always really loved that particular tradition and tried to implement it in my own home. I say try because we usually miss a lot of nights! I'm sure many of you have heard these, but I'm going to share some of my most favorite stories with you up until Christmas. And because I just started my baking I'll probably have a recipe to go along with it too!

Trouble at the Inn
by Dina Donohue

For years now whenever Christmas pageants are talked about in a certain little town in the Midwest, someone is sure to mention the name of Wallace Purling. Wally’s performance in one annual production of the Nativity play has slipped into the realm of legend. But the old timers who were in the audience that night never tire of recalling exactly what happened.
Wally was nine that year and in the second grade, though he should have been in the fourth. Most people in town knew that he had difficulty in keeping up. He was big and clumsy, slow in movement and mind. Still, Wally was well liked by the other children in his class, all of whom were smaller than he, though the boys had trouble hiding their irritation if the uncoordinated Wally asked to play ball with them.
Most often they’d find a way to keep him off the field, but Wally would hang around anyway—not sulking, just hoping. He was always a helpful boy, a willing and smiling one, and the natural protector, paradoxically, of the underdog. Sometimes if the older boys chased the younger ones away, it would always be Wally who’d say, “Can’t they stay? They’re no bother.”
Wally fancied the idea of being a shepherd with a flute in the Christmas pageant that year, but the play’s director, Miss Lumbard, assigned him to a more important role. After all, she reasoned, the Innkeeper did not have too many lines, and Wally’s size would make his refusal of lodging to Joseph more forceful.
And so it happened that the usual large, partisan audience gathered for the town’s Yuletide extravaganza of the staffs and creches, of beards, crowns, halos and a whole stageful of squeaky voices. No one on stage or off was more caught up in the magic of the night than Wallace Purling. They said later that he stood in the wings and watched the performance with such fascination that from time to time Miss Lumbard had to make sure he didn’t wander onstage before his cue.
Then the time came when Joseph appeared, slowly, tenderly guiding Mary to the door of the inn. Joseph knocked hard on the wooden door set into the painted backdrop. Wally the Innkeeper was there, waiting. “What do you want?” Wally said, swinging the door open with a brusque gesture.
“We seek lodging.”
“Seek it elsewhere.” Wally looked straight ahead but spoke vigorously. “The inn is filled.”
“Sir, we have asked everywhere in vain. We have traveled far and are very weary.”
“There is no room in this inn for you.” Wally looked properly stern.
“Please, good innkeeper, this is my wife, Mary. She is heavy with child and needs a place to rest. Surely you must have some small corner for her. She is so tired.”
Now, for the first time, the Innkeeper relaxed his stiff stance and looked down at Mary. With that, there was a long pause, long enough to make the audience a bit tense with embarrassment.
“No! Begone!” the prompter whispered from the wings.
“No!” Wally repeated automatically. “Begone!”
Joseph sadly placed his arm around Mary, and Mary laid her head upon his shoulder, and the two of them started to move away. The Innkeeper did not return inside his inn, however. Wally stood there in the doorway, watching the forlorn couple. His mouth was open, his brow creased with concern, his eyes filling unmistakably with tears.
“Don’t go, Joseph,” Wally called out. “Bring Mary back.” And Wallace Purling’s face grew into a bright smile. “You can have my room.”
Some people in town thought that the pageant had been ruined. Yet there were others—many others—who considered it the most Christmas of all Christmas pageants they had ever seen.


This fudge is seriously the best fudge I've ever tasted. My grandmother always used this recipe and while it may seem a little scary it's well worth the effort to master! Here are a few candy making tips that should always be used:

* You're going to want every last drop of candy to end up in a little wax paper wrapper, but never, and I mean never, scrape your pan as you're pouring out your candy. This will turn it grainy/sugary. And that's gross!

* As you cook your candy on the stove top, wash down the sides of the pan with a pastry brush dipped in water. This also prevents grainy yucky candy.

* Butter is a must. If your recipe calls for butter use butter! You cannot substitute on this one. Sorry.

* If you don't have a candy thermometer it's okay, but you'll have to have a cup of ice water on hand to check the stage of your candy often. (cold water candy test)

In a large heavy saucepan, stir together sugar, cocoa, and cream of tartar. Stir in the corn syrup and cream. Cook over medium high heat to 236 degrees (soft ball stage). Pour out on a buttered surface and cool to lukewarm. Add the butter and beat with a wooden spoon. Beat until creamy, then add vanilla. Knead the fudge until the vanilla is incorporated and form into a rectangle (or put it in a small buttered dish). Cover with plastic wrap. 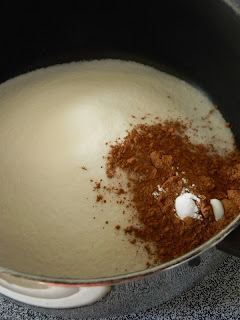 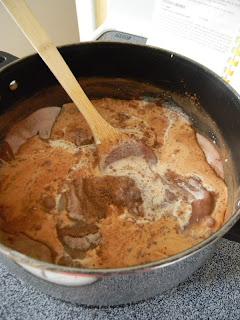 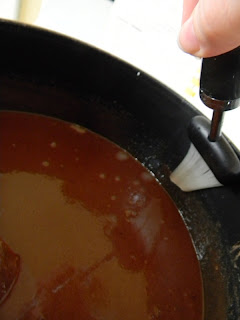 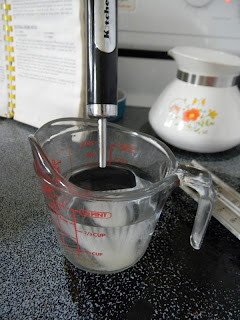 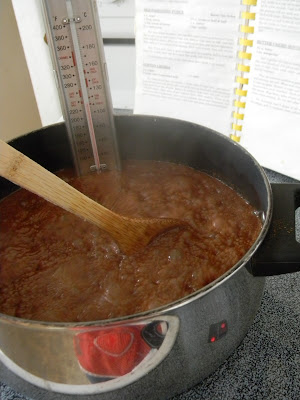 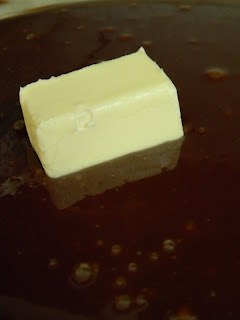 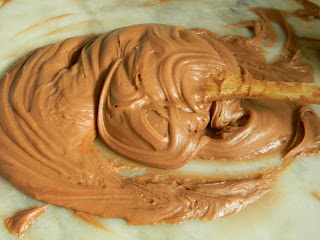 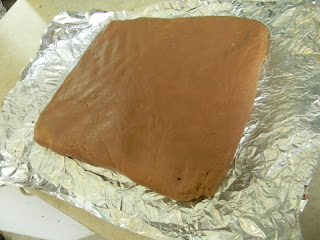